•  Visual history of the Vietnam War
•  Hundreds of photos, many of them rare and never published before
•  Photos of soldiers, helicopters and ground vehicles, villages and terrain, base camps, and more
•  Perfect complement to the narrative accounts in the Stackpole Military History Series, such as Street Without Joy and Land With No Sun

“This book consists of hundreds of fantastic, synopsized photos covering every aspect of the war in Vietnam. I spent a year in the jungles of the Central Highlands in a rife battalion and I am convinced that this book not only tells it like it is and should be required reading for all warriors, but is priced right to make a marvelous gift to the entire reading public. Thank you, Chris Evans! – CSM Ted G. Arthurs, Retired Airborne Infantry.”
–Amazon.com

America’s seemingly endless war in Vietnam comes to vivid life in Chris Evans’ BLOODY JUNGLE, THE WAR IN VIETNAM. A 2013 Stackpole Books release, Evans’ book offers up 200 pages of color and b&w photographs, most previously unseen, which chronicle the war as seen by soldiers, sailors, airmen and Marines.in all its aspects.

BLOODY JUNGLE divides its material, most of which was snapped by Vietnam vets, into chapters on ‘Soldiers and Marines,’ ‘The Viet Cong and the North Vietnamese Army,’ ‘ Weapons and Gear,’ ‘ Aviation,’ ‘Fighting on the Water,’ ‘R&R and Going Home,’ etc. They depict American fighting men in combat, patrolling, being med-evac’ed, lounging in the rear with the beer, U. S./enemy weapons and combat gear, helos, tanks, B-52s, C-130s, PBRs, M113s, M48s, USO shows, Vietnamese civilians, countryside vistas, etc.

Because BLOODY JUNGLE’S coverage is mainly confined to the infantryman’s war with limited coverage of USAF air ops and USN Yankee Station ops, Evans’ book provides a fascinating, up-close-and-personal photo-guide to the war. Since so many of the pix are candids snapped by grunts, the reader gets an authentic, grunt-level view of that conflict. Recommended.
–Michael O’Connor Top 500 Reviewer Amazon.com 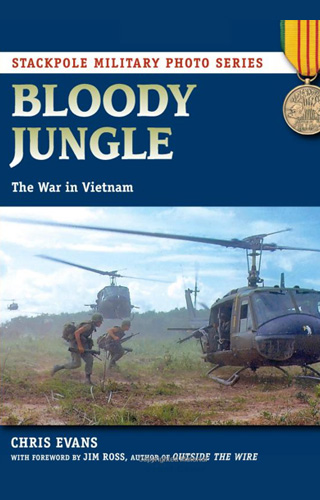