I’ll be the historian on a tour in Europe next summer and you’re all invited. We’ll be visiting battlefields of the First and Second World Wars and also making many cultural stops along the way including several days and nights in Paris. You can see more about it here:

2018 – CanHist Tour to France and Belgium

Yara Greyjoy is, apparently, the worst naval captain to ever sail the seas. How in the hell does a bloody armada sneak up and destroy your entire fleet that easily? Honestly, the whole battle felt more like a plot device than anything else. I imagine the show runners sitting around trying to figure out what kind of bloodshed they could add to this episode and voila, let’s just destroy a fleet. Easy-peasy.

Speaking of inept, how is Jon Snow still so naïve? He’s going to meet Daenerys based on a single scribbled message. He no sooner threatens to kill Littlefinger if he touches Sansa than he’s off on what might be a wild goose chase, leaving Littlefinger alone with Sansa. Seriously?

I like the show, but mercy it can be aggravating at times.

Public libraries and the books the contain offer the writer a near infinite amount of worlds to explore. Still, there’s something special about owning your own copy. As it happens, the used bookstore I frequent – The Book Cellar on York Avenue here in NY – is in the basement of the Webster Library, a branch of the New York Public Library. Two books with one bird.

My latest finds happen to be purchases, and vary widely in subject matter. I have no idea at this point if any will feature in my next novel, but I don’t mind either. I’m reading and learning and that – I humbly submit – is never a bad thing. Of the three, the book on heraldry is likely to get the most use as I am working up a character who may be a pursuivant of arms (an officer of heraldry). He/she may also be an amanuensis – a literary assistant – witness to the unfolding of history in the making. 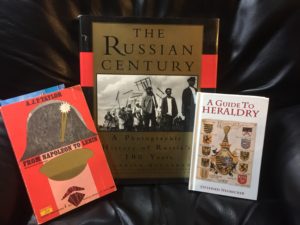 It’s probably a good thing I go to the bookstore and not, say, the wine store, because I always come home with something. Usually several. This weekend was no exception. None of the three pertain exactly to any book I am currently writing, but each seems interesting and well, that’s more than enough reason to bring them home. 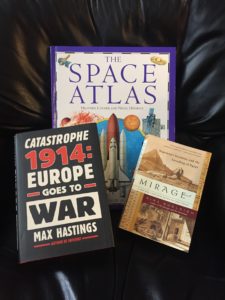 According to this study we’re all mulch. And in 100 days! I knew The Walking Dead was full of it.